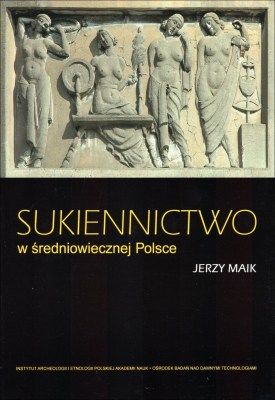 Jerzy Maik is an archaeologist, for nearly 50 years employed at the Department Research on Ancient Technologies of the Institute of Archaeology and Ethnology of the Polish Academy of Sciences, which he directed for 14 years, and for the next four he was the Institute's director. He specializes in the study of the history of ancient and medieval textiles. It is with great joy that we would like to inform that another work of his has just been published. We encourage everyone to read it.

The present book is a story about people of the Middle Ages - creators of woollen cloth from the moment of shearing sheep, through weaving and finishing textiles, to their sale. It tells about the daily life of clothiers - professional, but also family, social and religious. An important element of this life was the fight against foreign competition, mainly against the influx of good, cheap Western cloth. However, the competition was not the luxurious Flanders cloth, the quality of which remained beyond the possibilities of our clothiers. Clothmaking, in the form practically unchanged since the Middle Ages, survived until the late 19th century and the development of modern, mechanical factories.

We kindly recommend to buy