Weklice, site 7, Elbląg comm. The cemetery of Roman Period elite in the centre of amber coast

The main aim of the project is through multi-faceted specialist analyses with the involvement of interdisciplinary research scientific description and prepress the newest results of the excavations at the largest in Europe biritual cemetery of Wielbark Culture at Weklice, site 7, Elbląg comm., Warmińsko-Mazurskie voiv., located on the Elbląg Heights. According that, the project involves the dissemination of sources of high scientific value by creating unique scientific workshop. To the present, the first volume monograph of the cemetery was published in the international book series Monumenta Archaeologica Barbarica, including a few pre-war finds and graves and features from the excavations in the years 1984-2004. Discovered in 2005-2013 another ca 120 graves with over of 1200 finds made of precious metals, iron, copper alloys, amber, glass, clay and wood are the main study subject of this project. The excavation of this cemetery (functioning around I-IV century AD), also provided important and abundant anthropological sources and helped to make innovative observations on the anthropological structure of the community buried here. On the other hand the remains of botanical remains and textiles allowed for interesting observations on the forms of the graves, traces of funeral rite and characteristics of ceremonial attire. The cemetery at Weklice located in the center of the amber coast and then crossing of trade routes is undoubtedly the burial ground with an exclusive character. Evidence of this wealth are grave goods, both local and imported i. a. from Roman Empire, Scandinavia and the Black Sea areas. The study of these materials is planned in form of partial synthesis as a detailed specialist analyses with the participation of experts from natural and exact sciences. It should be made clear that the study of this specific and also a variety of archaeological sites as cemeteries is a multidisciplinary effort. It requires the cooperation of professionals from various fields as i.a. anthropology, denistry, radiology, biochemistry, genetics and many others.

1. Specialized analyses of the material from Weklice cemetery: anthropological, technological of finds (metals, pottery, textiles) with the study of the chemical composition, botanical, C14
2. Descriptive and illustrative catalogue of graves and features from Weklice cemetery (seasons 2005-2013), including synthetic results of the specialist analyses Institute of Archaeology and Ethnology Polish Academy of Sciences

The result of the project will be the preparation of the manuscript monograph.

In 2014, the following activities related to the project were done: 1. Analysis and elaboration of botanical taxonomic terms and organics wood samples obtained during research seasons in the years 2005 to 2013 in the cemetery of Wielbark Culture at Weklice; 2. The scientific reconstruction dozens forms of pottery from the research seasons from 2008 to 2009; 2011 to 2013 with a description of the technology of ceramics; 3. Elaboration scientific descriptive catalogue of graves and features from seasons 2005 to 2006; 4. Supplementary graphics digitalization field documentation (plans and profiles of objects) discovered during research seasons of the years 2005 to 2013; 5. Complementary graphic illustration of finds (metals, glass, amber, clay), discovered in research seasons from 2008 to 2009.

– further work on the implementation of tasks within the project schedule
– participation in international symposium „10th International Symposium on Knappable Materials. On the Rocks”. University in Barcelona (7-12 September 2015).
A paper on the materials developed within the project delivered by dr Magdalena Natuniewicz-Sekuła and dr Dagmara H. Werra, entilted Flints in Iron Age graves. Flints from the cemetery at Weklice Elbląg country, Elbląg district, northern Poland. 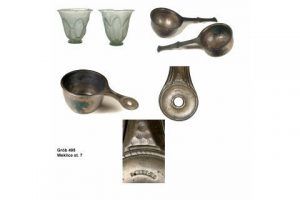 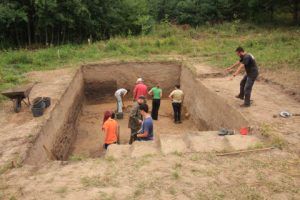 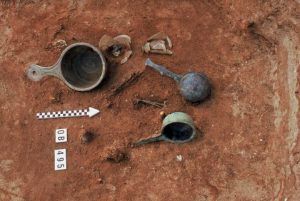 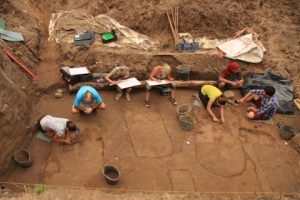 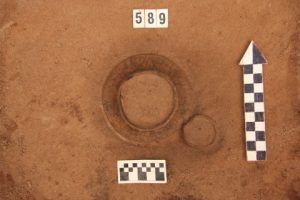 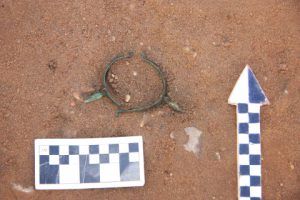