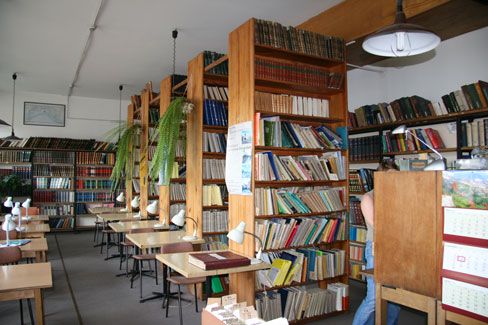 The Library was established in 1954 with the transfer of a collection of books from the Committee for the Investigation of the Origins of the Polish State and duplicate copies of publications from the National Library. In 1979 the Polish Academy of Sciences accorded it the status of Library of National Importance. Publications kept at the Library deal with prehistory, medieval and classical archaeology, ethnography, history of material culture, numismatics, to mention just the most important areas. The collection consists of more than 98 000 volumes, about half of which are periodicals, including 595 currently issued titles. Roughly three out of four volumes are foreign publications obtained by the Library as part of exchange agreements with 485 institutions; in Poland similar exchange schemes involve 140 institutions.

The Library is presently rated as one of the best academic libraries in the country, comparable with the best institutions of this kind in Western Europe. Its collections are used by archaeologists, historians and ethnographers from scientific institutions in Warsaw and elsewhere, including foreign ones. It is also being used by students of the Institute of Archaeology of Warsaw University.

The Main Library works closely with its branches in Cracow, Łódź, Poznań, Szczecin and Wrocław. The Institute as a whole boasts more than 180,000 volumes in its various libraries.