Project lead, institutional Institute of Archaeology and Ethnology (IAE PAN)
Project financing: Research financed within the National Humanities Programme, a project of the Ministry of Science and Higher Education, in 2012–2015

Also contributing to the project will be these retired researchers of the IAE PAN Institute:

A shared coding/cataloguing process by experienced retired archaeologists who conducted fieldwork on the sites under study and their younger colleagues will offer the latter a valuable opportunity for professional advancement, while also guaranteeing the high quality of the publication. The researchers from outside the IAE PAN Institute are, for the most part, natural scientists. Also see the list of authors and editors in the “Project timetable” section plus the following photograph. 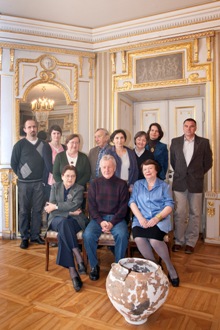 In a situation where the modern conservation ideas have effectively narrowed the inflow of new materials from archaeological sites explored by noninvasive excavation methods, an expansion of the source base — so much important for studying the distant past of Polish lands — can be achieved by taking a modern approach to the already investigated sites. Modern archaeology has at its disposal new methods — such as palaeobotanical analysis (traces of macro and micro remains on pug/cob and pottery), traseology, petrographic analysis of flint and stone artefacts, analysis of the chemical composition of ceramics, metals, etc. — which produce a huge influx of previously unknown data, yielding fascinating insights into the study of past societies and cultures. Thanks to a prolonged effort to document the available sources, drawings and photographs (using the scanning electron microscope), the achievements of field expeditions of even many years ago will not be wasted. With the publications of the materials listed below, the teamwork findings from sites of importance for successive stages in the prehistory of Polish lands will be introduced into the lifeblood of academic exchange. The selected archaeological sites are venues of fieldwork conducted since as early as the 1950s by the Institute for History of Material Culture (now, the IAE PAN Institute of Archaeology and Ethnology). We now have the last chance for the project to be, at least partially, joined by researchers who conducted excavation work at that time. This, combined with the presence of young researchers, will help ensure a generational continuity, so much important for all disciplines of humanities.
The project deals with questions relating to nearly all prehistoric epochs — from the Palaeolithic to the modern times — and different parts of Poland. It is pursued by researchers from different Centres of the IAE PAN Institute, and also from other institutions involved in the study of the past.

Detailed goals of the project:

Following the decision to reduce the funds available (from 5,362,999 zloty to 1,500,000 zloty) and shorten project duration (from 60 to 36 months), the previous version of the project and its finances were subjected to careful analysis and reassessment. In the new circumstances, the Institute will scale down publications to 8 volumes of the monograph which — in accordance with the modern standards and with project application — present selected sites covering epochs from prehistory to modern times. With the funds reduced, the selected sites are the least cost-intensive ones.
For the oldest prehistoric era, the Palaeolithic, these are sites left by hunter-gatherer communities settled on the Polish Plain — in central Poland (Całowanie) and the east of the country (Nieborowa, in Western Polesie region). They are selected for the high level of source quality, reflecting methodical excavation work and the preserved fieldwork documentation. To be ready for publication, they only need some additional handling and processing. They represent the type of open settlement from the Late Palaeolithic–Mesolithic (Całowanie) or Palaeolithic–Early Iron Age (Nieborowa), adding to our knowledge of European Plain settlement in those times.
The next one among the selected sites, dating back to the Neolithic, is a defensive settlement in Sandomierz on Wzgórze Zawichojskie hill, Świętokrzyskie Voivodship, which was explored in 1981—1989. The materials gathered will make it possible to reconstruct the palaeography of Wzgórze Zawichojskie of the Atlantic and Subboreal periods (when the settlement under study was in use), namely to reconstruct the morphology of the hill itself and the immediately neighbouring area, and also to reconstruct that area’s hydrography and plant community. The cataloguing and publication of the materials, with account taken of their settlement context, will provide a highly valuable complement to the already available data on settlement in the Sandomierz Region (Ziemia Sandomierska), a so important area for Neolithic studies.
In the Bronze and Early Iron Age, the Polish lands were largely inhabited by Lusatian communites. The cataloguing of research findings from the settlement on site 3 in Słubice, outside Gostynin, Mazowieckie Voivodship — where, for example, materials left by the preceeding Trzciniec culture inhabitants were found — is of paramount importance, providing a valuable insight into the prehistoric past of East Bank Masovia which is rarely present in academic studies.
The second part of the volume will catalogue ceramic materials from excavation research (mostly trial excavations), conducted in the 1960s and 1970s on Early Medieval sites around Warsaw — in Błonie (a gród stronghold) and Kopytowo in what is today Grójec Poviat (In Dziarnów, site 3; in Grójec, Stara Warka, site 1 – gród stronghold) — and in what is today Świętokrzyskie Voivodship (Szewna – Medieval conical gród stronghold).
As part of the programme to study the history of small towns in the pre-partition Polish-Lithuanian Commonwealth, archaeological excavations were conducted in Solec and Janowiec on the Vistula. The project will make possible the publication of Mgr Magdalena Bis’s doctoral dissertation devoted to Solec ceramics, which may importantly add to our knowledge of this specific pottery segment.
A comprehensive research of Janowiec will be crowned with an archaeological-historical monograph, presenting this small town’s past in diverse aspects, which is especially interesting because research of this kind has not been carried out so far. The publication of the findings will not only throw light on the history of a single small town, it will also represent —pars pro toto — many other similar small towns, so characteristic of modern-day Poland.
The finds from Tykocin castle research provide an important complement to the available archaeological sources on the origins of the Tykocin estate. In the Late Middle Ages, it was the fortified seat of the Gasztołd family, then a Renaissance castle of King Sigismund Augustus, and later a 17th century fortress. Cataloguing and handling so numerous and so diverse collection of sources will provide a valuable contribution, not only to studying the history of Tykocin castle and the living conditions of its inhabitants, but also for the archaeology of the Late Medieval and Modern times.

Measures to achieve the goals:

The methods to be employed in project implementation represent, for the most part, the standard approaches to description and analysis of portable and non-portable source material, obtained through Archaeology’s typical method of excavation. As this stage of work, it is imperative that documentation in the form of drawings and photographs should be provided. It is planned that a wide range of specialist research will be conducted on a wide scale, producing findings which are expected to expand our knowledge of questions such as production methods for particular artefacts, the raw materials used, the usage patterns for some tools and other objects. The following kinds of analysis are planned: palaeobotanical (traces of macro and micro remains on pug/cob and pottery), archaeozoological, trace (traseological) analysis of flint tools, petrographic analysis of stone artefacts, and analysis of fill layers. There are also plans for laboratory analyses of the chemical composition of ceramics and metals, geological analysis of the immediate surroundings of the sites under study, and comparative metal-science research of bog ores and metallic artefacts, and also petrographic research of local clay and ceramics. Radiocarbon dating and thermoluminescence dating is also planned. Interdisciplinary research is becoming a standard approach in humanities.

The outcome of the project will take the form of publication of 8 volumes about the most important sites, covering the whole prehistoric epoch from the Palaeolithic, and also historic times: the Middle Ages and the modern period. Each volume will carry a summary (around one-tenth of the overall content of the volume), in either German or English. Two volumes will be wholly published in those languages (Całowanie and Tumiany settlement). The sequence of publications will be contingent on the degree of project advancement. Work to be conducted on sites with numerous and diversified materials —requiring many different specialist analyses — will certainly take a longer time.
Below, aggregate data on individual volumes are provided, followed by more extensive presentations — by editors of the respective volumes — full with illustrative material about the sites being the subjects of the planned monographs.

The publication of the eight volumes of the monograph of carefully researched sites, catalogued in compliance with modern methodology, will be of considerable importance for the Polish society’s heritage and culture. Along with providing revealing insights into history, both at the regional and national level, it will make it possible to place the project findings within the context of European archaeological achievements — remembering that the communities inhabiting Polish lands have maintained inter-regional and long-distance contacts since times immemorial.
The findings of research into sites of different chronology and of different venues will likely prove of significant value for piecing together a picture of past environmental conditions, from the Late Pleistocene to the modern times. They will also help study man’s impact on the surrounding world, by means of gathering, hunting and, in later periods, farming the land, raising animals and taking other economic activities, aimed not only to acquire food but also various kinds of raw materials which, with the passage of successive centuries and millennia, were being processed at an increasing scale. This will make it possible to assess the extent of anthropomorphic pressure on the environment from prehistoric and early modern communities.